The National Science Foundation on Sept. 9 announced it will fund a new endeavor to bring atomic-level precision to the devices and technologies that underpin much of modern life, and will transform fields like information technology in the decades to come. The five-year, $25 million Science and Technology Center grant will found the Center for Integration of Modern Optoelectronic Materials on Demand — or IMOD — a collaboration of scientists and engineers at 11 universities led by the University of Washington.

IMOD research will center on new semiconductor materials and scalable manufacturing processes for new optoelectronic devices for applications ranging from displays and sensors to a technological revolution, under development today, that’s based on harnessing the principles of quantum mechanics. 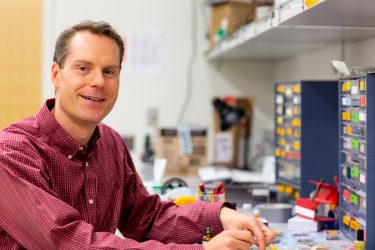 David Ginger at the sample preparation laboratory for atomic force microscopy in the UW’s Molecular Engineering and Sciences Building.Dennis Wise/University of Washington

“In the early days of electronics, a computer would fill an entire room. Now we all carry around smartphones that are millions of times more powerful in our pockets,” said IMOD director David Ginger, the Alvin L. and Verla R. Kwiram Endowed Professor of Chemistry at the UW, chief scientist at the UW Clean Energy Institute and co-director of NW IMPACT.  “Today, we see an opportunity for advances in materials and scalable manufacturing to do the same thing for optoelectronics: Can we take a quantum optics experiment that fills an entire room, and fit thousands — or even millions  — of them on a chip, enabling a new revolution? Along the way we anticipate IMOD’s science will help with a few more familiar challenges, like improving the display of the cell phone you already have in your pocket so the battery lasts longer.”

Optoelectronics is a field that enables much of modern information technology, clean energy, sensing and security. Optoelectronic devices are driven by the interaction of light with electronic materials, typically semiconductors. Devices based on optoelectronics include light-emitting diodes, semiconductor lasers, image sensors and the building blocks of quantum communication and computing technologies such as single-photon sources. Their applications today include sensors, displays and data transmission, and optoelectronics is poised to play a critical role in the development of quantum information systems.

But to realize this quantum future, present-day research must develop new materials and new strategies to manufacture them. That’s where IMOD comes in, Ginger said. Building on advances in the synthesis of semiconductor quantum dots and halide perovskites, the center will integrate the work of scientists and engineers from diverse backgrounds, including:

“NSF Science and Technology Centers are integrative not only in the sense that they span traditional academic disciplines, but also in the sense that they seek to benefit society by connecting academic research with industrial and governmental needs, while also educating a diverse STEM workforce,” said Ginger. “To this end, we’re extremely lucky to have had the support of an amazing list of external partners across the fields of industry, government and education.”

A partial list of IMOD’s external partners includes companies such as Amazon, Applied Materials, Corning Incorporated, Microsoft, Nanosys and FOM Technologies, Inc.; government organizations like the National Renewable Energy Laboratory, the Pacific Northwest National Laboratory and the Washington State Department of Commerce; and educational partners including GEAR UP at UW, Catalyst @ Penn GSE and the Center for Education Integrating Science, Mathematics and Computing at Georgia Tech.

The center will launch a series of mentorship, team science training and internship programs for participants, including students from underrepresented groups in STEM and first-generation students. Center scientists will also work with high school teachers on curriculum development programs aligned with the Next Generation Science Standards and act as “ambassadors” to K-12 students, introducing them to STEM careers.

“In partnership with UW QuantumX and the Northwest Quantum Nexus, IMOD is launching a Quantum Training Testbed facility to provide cutting edge training and workforce development opportunities for students from across IMOD’s participating sites and partners,” said Kai-Mei Fu, associate professor of physics and of electrical and computer engineering at the UW, who is IMOD’s associate director of quantum workforce development. “We’re excited to have such strong support from our partners in the region, allowing us to build on the investments that Washington state has already made in the Washington Clean Energy Testbeds to support workforce training and economic development. For example, Microsoft plans to donate a cryostat that will allow our students to cool samples down to within a few degrees of absolute zero to study phenomena such as quantum spin physics and decoherence, and we have plans to do so much more for our trainees. Right now, we’re asking the question: ‘What is the equipment we wish we had been able to experiment with as students?’”

In addition to Ginger and Fu, other UW faculty involved with IMOD include Brandi Cossairt, a UW professor of chemistry; Devin MacKenzie, associate professor of mechanical engineering and of materials science and engineering, and technical director of the Washington Clean Energy Testbeds; Arka Majumdar, associate professor of physics and of electrical and computer engineering; and Daniel Gamelin, professor of chemistry and director of the Molecular Engineering Materials Center. Fu and Majumdar co-chair UW Quantum X and are also faculty members with the UW Institute for Nano-Engineered Systems. Ginger, Cossairt, Fu, MacKenzie and Gamelin are member faculty at the Clean Energy Institute. Ginger, Fu, Majumdar and Gamelin are faculty researchers with the UW Molecular Engineering and Sciences Institute.