Since its launch in 2013, OnePlus has constantly increased its product portfolio. The brand began with smartphones as its primary product and has expanded to smart wearables, audio products and even smart televisions. In future, users might also see a new product category. According to reports, OnePlus is about to enter the tablet manufacturing market, with their device called OnePlus Pad. Keep reading to know more about the OnePlus tablet.

According to reports, OnePlus has registered a trademark with the European Union Intellectual Property Office, for the name “OnePlus Pad”. As the name immediately resembles with Apple’s popular tablet lineup called iPad, it is being speculated that this might be the name of the OnePlus tablet. An image of the application receipt has also surfaced on the internet, titles EUTM File Information. According to the image, the trademark application was filed on July 1, 2021. However, this is all that is available on the OnePlus tablet, as the listing does not reveal any other detail about the device. 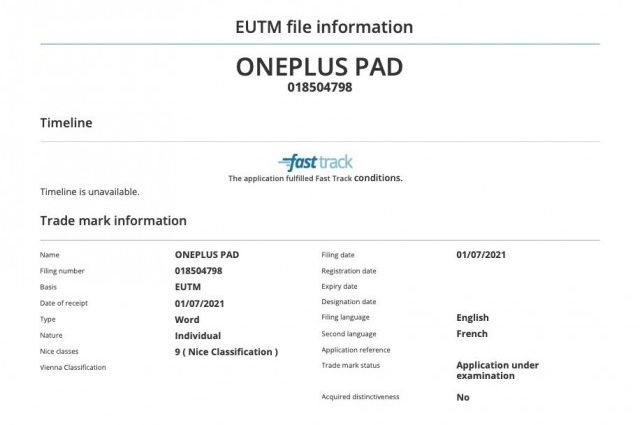 The news comes right after OnePlus’ announcement of merging certain teams with Oppo. The merger has been made in order to synchronise software updates and deliver a seamless experience across different products that both companies offer. OnePlus also announced four years of security patch updates and three years of Android version updates for the OnePlus 8, which was launched in 2020. As for the secondary smartphone lineup, OnePlus has promised only three years of security patch updates and two OS updates.

OnePlus Tab: What to Expect?

OnePlus phones were known for their ‘flagship killer’ specifications and price. However, with their recent models, OnePlus is reshaping as a premium smartphone brand. This shift in the ideology might reflect in the upcoming OnePlus Pad as well. The OnePlus Tab might compete directly with Samsung’s lineup of tablets, including the entry-level models to the mid-range models. As OnePlus has already announced the merger with Oppo, both the custom UIs that these brands use are also uniting. The resulting operating system might be ideal for a tablet experience. For more updates about OnePlus phones, stay tuned.